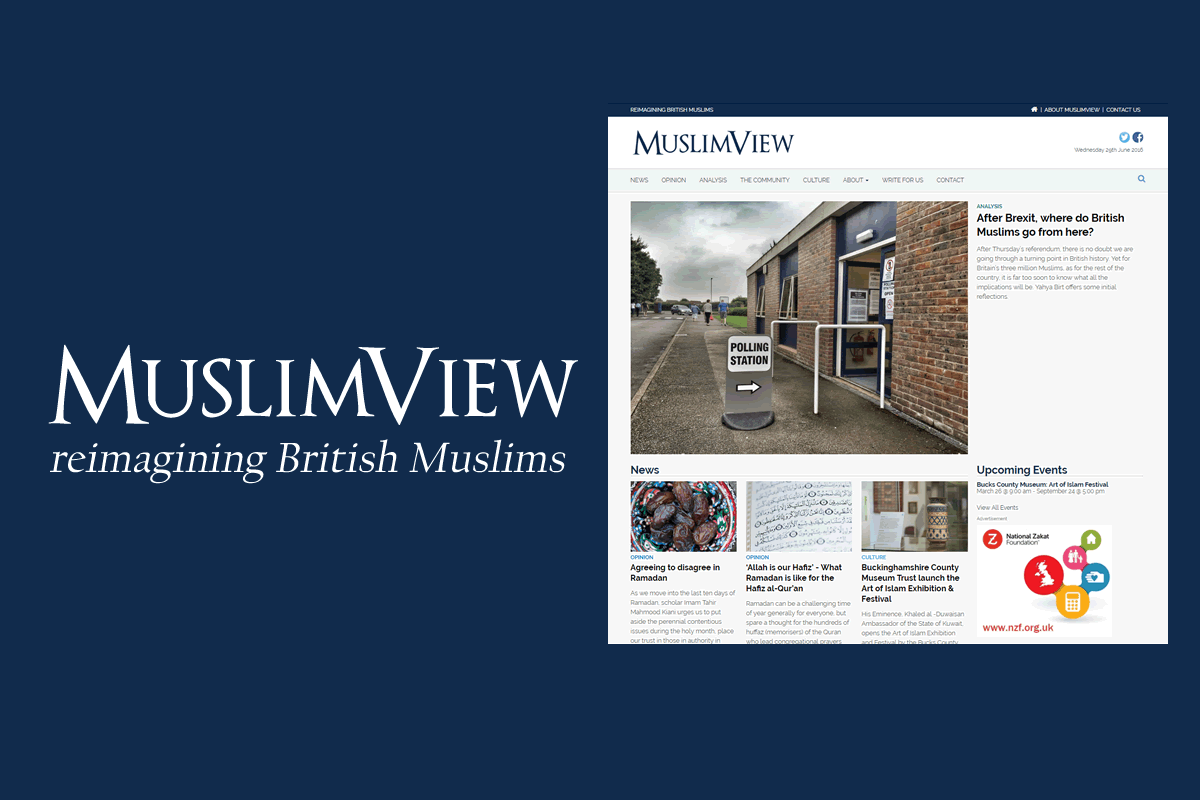 As Muslims in Britain we live in interesting times. Events move fast and unpredictably as recent events have clearly shown. Muslims remain firmly in the spotlight of the media. Not a day goes by when some story or other has at the centre of it our community and you can wager that the next breaking story involving Muslims will be a negative one. This trend is likely to continue well into the future and doesn’t look like changing direction anytime soon.  As Muslims we have allowed ourselves to be defined by both the media and political agenda(s) of the day. We are constantly chasing the news cycle and agendas and in doing so reinforcing the idea in people’s minds that, as a community, the only things that we are concerned with are Prevent, radicalisation and terrorism. As a community, have so much more to offer, but we don’t have our own representation in the media. We all constantly complain about the media and its, mostly, inaccurate and unfair portrayal of Muslims. Well now we can do something about it.

In May 2015, Dr Atif Imtiaz contacted me about an idea that he had been formulating over the last 5 or 6 years.  After reading the book The Jewish Chronicle and Anglo-Jewry 1841-1991 by the late historian David Cesarani, Atif soon realised that the Muslims of Britain do not have an equivalent community newspaper. The JC played an important part in the development of modern Anglo-Jewish life and cementing British Jewry into British society. It also served as an important platform for debate among British Jewry and shaped Jewish identity through the years. Not only this, it has informed wider political and social debate in the corridors of power and is seen as a credible and authoritative source on the Anglo-Jewish community.

On the back of this the idea of MuslimView was hatched by Atif. Very early on he decided that print media was not the way to go because of the start up and running costs involved and the limited reach of print media. With an increasingly digital world, even traditional print media was moving into the digital space and scaling down print operations because of dwindling circulation. It made sense to occupy digital media space.

The first hurdle faced was finding someone to take up the central editorial role and many of the people he approached did not respond positively to the idea. The second hurdle was one of financial support. There was some initial commitment from potential supporters in the business community but this hasn’t developed into the kind of support required for this kind of venture. The project has struggled since.

My involvement with the project came when Atif realised that I had become available for work. My background in technology, the web and the British Muslim community since the early 90s seemed an ideal blend to take up the central editorial role required to drive the project. We also managed to get some financial backing from some business people and some wealthy individuals who saw the value in what we are trying to achieve.  This enabled me to project manage the design and development of the MuslimView website and work full time in developing links with various writers. The website launched in November 2015.

Nearly eight months on we’ve managed to establish MuslimView in the digital media space, we have a small but growing body of volunteer writers from a diverse background writing on a wide range of issues that concern Muslims in Britain. The feedback we’ve received from readers is that MuslimView is needed. Everyone we’ve spoken to about the project sees the value in what we are trying to achieve. Our aims are simple – to be a credible and authoritative source for news about Muslims in Britain. Our objectives are – to develop and stimulate interest in grassroots, community and citizen journalism amongst Muslims in Britain and untap the wealth of writing talent in the Muslim community and uncover the experience of life in Britain. MuslimView to be the platform through which community issues are discussed and debated and become a reference point for mainstream media and in the corridors of power. MuslimView seeks to set the tone and narrative of Muslims in Britain that does not chase media spin or political agendas.

How can you help?

Your support need not only be financial, we are always looking for volunteer writers who have something to say and can write well. There are hundreds and thousands of stories to be uncovered and told. There are issues that need to be debated and discussed. There are key British Muslims whose life and work need to be highlighted and promoted.

We are looking for volunteers who can scour national news sources for stories that are relevant to Muslims in Britain and do weekly roundups of the stories and provide some comment with each story. This is so that we can see what the national narrative is about Britain’s Muslims and be clued up on the issues facing us in the media.

If you have an interest in local and national politics, let us know what is going on. Are there Parliamentary groups discussing issues that Muslims need to be aware of or council chambers in which local issues relevant to Muslims are being debated?

Are you an academic involved in research relevant to Muslims? Let us know, we can promote your work and help your research.

Do you like reading, send us a book review.

Do you attend events, then let us know what’s on, when and where it is on.

MuslimView, whilst not a charity, is a not for profit organisation and is entirely dependent on financial support from generous and visionary individuals and business which has been gained thus far through word of mouth. We are therefore seeking other businesses and individuals who see the value in what we are trying to achieve and come forward and support us. Our target funding amount is £60,000 per year. This will cover salaries, expenses, running costs and will enable us to start offering fees to contributors.

We are at a stage where we need to find additional financial supporters to help make MuslimView a continued success and give us a firm financial footing for the next 3 to 5 years to support our development. We intend to move into video content in later years and present interviews and short video reports and cannot do so without financial support and we are pursuing a distributed, crowd-funding strategy at present.

If you or anyone you know is in a position to support MusilmView financially or otherwise, please get in touch with editor@muslimview.co.uk (that’s me!).