Here is another Muslim hoax that has been circulating for a few years now. Apparently Saudi Aramco uncovered a giant human skeleton whilst exploring for Gas. Turns out that the resultant images from this “archaeological dig” were photoshopped and were for a competition and us gullible Muslims peddle it as the truth to all and sundry and encourage others to pass it on.

Here’s the image and the accompanying report: 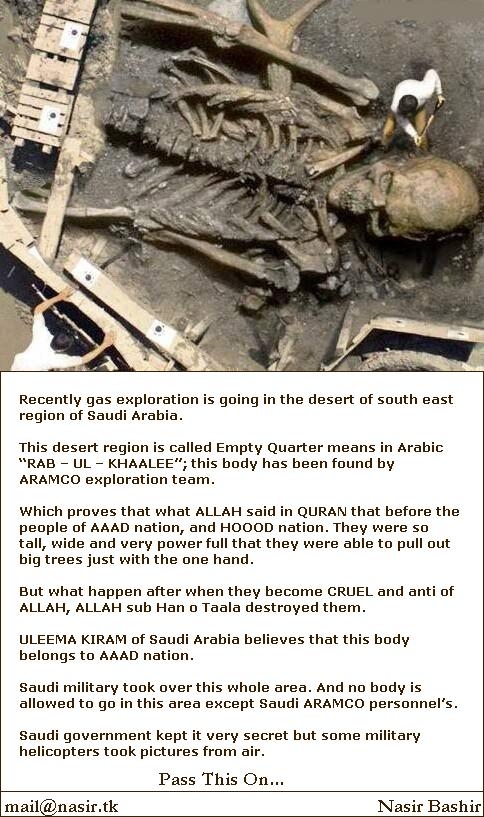 Instead of passing it on please email Nasir Bashir (if he hasn’t closed down his email address) and tell him what a gullible person he is and tell him that such things make Muslims look stupid and insecure about their religion.

Snopes has the low down on the hoax here.

All too often we see Muslims only too willing to pass these things on uncritically to others and then it snowballs. You get people passing these on to colleagues at work saying “Look Bob, I told you that Islam was the truth…” and then Bob goes to snopes.com and checks it out and has a good laugh at the expense of Islam and Muslims and thinks “what a bunch of crazy fools”. Come on people, all it takes is a quick Google to establish facts before passing stuff like this on.

3 thoughts on “Skeleton of Kaum al-Aad, the people of the Prophet Hud?”