IMPORTANT! If you plan to leave a comment, please read this blog post fully, there are too many people totally missing the point of this blog post and are leaving comments using foul language and comments that quite clearly show that they have not read and understood the content of this post.

This email does the rounds once in a while, this time I got it with a picture so you can see what those pesky infidels at Nike have done! 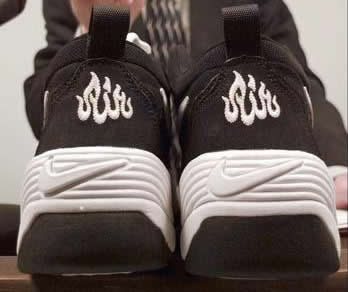 Now, I don’t know about you but I think perhaps us Musilms have become too tetchy, OK so it kind of has a passing resemblance to Arabic and the central part of the design looks like lam, lam, alif, it also looks like a “W” with bits next to it. To me it resembles fire more than anything else and even has a passing resemblance to the Hindu “Om” symbol [Om wiki entry]. I emailed Nike about this and got the following reply back from their Consumer Affairs department today [20-OCT-2008]:

Thank you for your email.

Unbeknown to Nike the script logo used on the shoe could be seen to resemble the word “Allah” written in Arabic-style script.

This is an issue we took, and still take, very seriously. Once we became aware of this situation shortly after the product went on sale in 1996, we immediately issued a recall of the product from worldwide sale and a public apology to the Islamic community.

As the product was designed and originally sold in the US, throughout this process we worked closely with the Council for American Islamic Relations (CAIR) to resolve the issue. They helped us in our efforts to rectify our mistake and to communicate our apologies to all Muslims. I attach a copy of the press release that was issued at the time outlining steps taken by Nike to rectify the issue.

We hope that you will understand that it was never out intention to offend the Islamic community, and that we have undertaken everything possible to resolve the issue and communicate our sincere apologies.

Nike has the utmost respect for all religions, cultures and individuals, and would never intentionally offend anyone. If you have any questions or further concern regarding this issue please do not hesitate to contact us.

They even included a statement (first put out in 1997) that they put out after reaching an accord with CAIR in the USA as follows:

Beaverton, Oregon, June 24, 1997 – NIKE today announced an agreement to ease Muslim concerns over the logo design on a range of summer basketball products.

“Through a long process of discussion, we have resolved our differences of opinion with the Muslim community,” said Martin Coles, NIKE’s Vice President, Europe, “While we never intended to offend, we did; we have done everything possible to communicate our sincere apologies and to address issues related to the distribution of any products offensive to the Muslim community.”

“The potential for confusion was first identified by one of our Muslim distributors,” said Coles, “We immediately affected design alterations we believed would avoid offense. Since CAIR’s alert, we have worked to mitigate the impact on the Islamic community, and have made organisational changes to ensure that similar misunderstandings are not repeated.”

The chronology of this event includes the following:

1. In late September, NIKE’s Muslim distributor in the Middle East voiced concern over the logo appearing on salesman samples of a range of summer basketball shoes — the script logo resembled the Arabic word “Allah”.

2. In addition to raising concern over this initial logo design, their distributor also suggested a number of ways to revise the logo that would (should) be acceptable to the Muslim community.

3. A design change was immediately ordered. The original logo was dropped, and the “A” was clearly separated from the “ir” on the commercial version of the product.

4. In mid-March, NIKE received a letter from the Council on American Islamic Relations (CAIR) alerting them that samples of summer basketball shoes with the original logo had been seen in the Muslim community.

5. On March 27, CAIR indicated that commercial product with the amended logo, becoming available at retail, included a graphic design that could still  “be interpreted as the Arabic word ‘Allah'” . CAIR demanded the following of NIKE:

– an apology to Muslims
-an internal investigation of how this incident occurred.
-sensitivity training on Islam for Nike employees
-the immediate recall of all shoes using either offensive symbol

6. Since that time, NIKE has taken the following steps to account for and resolve this issue:

7. NIKE has apologized to the Islamic community for any unintentional offense to their sensibilities.

8. NIKE has implemented a global recall of the original salesman samples, including an accounting of any samples which may have been sold.

9. NIKE has diverted shipments of the commercial products in question from “sensitive” markets. To date, over 30,000 pairs have been diverted from Saudi Arabia, Lebanon, Kuwait, Malaysia, Indonesia and Turkey.

10. NIKE has discontinued all models with the offending logo. No further product with either version of the logo will be produced.

11. NIKE has agreed to pull back all remaining product in their distribution center.

12. NIKE has implemented organizational changes to their design department to tighten scrutiny of logo design. Responsibility has been centralized into one department and all graphic designs must now be approved by a design review board.

13. NIKE is working with CAIR to identify Muslim design resources for future reference.

14. NIKE has taken measures to raise their internal understanding of Islamic issues. Specifically:
-Worked with CAIR to identify reference materials to locate in their Design Library
-Scheduled a discussion on Islamic imagery at their next Design Summit
-Centralize the graphic design process to ensure those with familiarity in Islamic issues evaluate all graphic designs
-Conducted a formal investigation into this issue, and CAIR is satisfied that no deliberate offense to the Islamic community was intended.

“I am glad we were able to come to a mutually acceptable understanding,” said Coles, ” I believe that we emerge from this process with a deeper understanding of Islamic sensibilities and a stronger bridge into Muslim communities.
###

Now, considering the initial controversy was in 1996 and was seemingly resolved a year later in 1997, why then in 2008 do we still have Musilms circulating this non-issue and then calling into question the faith of people who do not then forward the email on to an x number of other Muslims?

It always boils down to the same question, whether it is something about Coke, Pepsi, Nike etc – Why would a multi-national corporation like Nike, with multi-Million dollar interests in the Middle-East and the Muslim world, purposely offend Muslims and jeopardise profits on purpose and then go to the expense of a product recall?

Come on people move on and occasionally use your brain on such matters and especially if the issue is dead, buried and, like this one, actually decomposed.